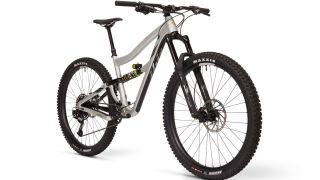 Ripmo AF gives those who like the Ibis geometry and DW suspension, an inexpensive option (Image credit: Ibis)

The other brand from Santa Cruz has finally responded to customer requests for a more affordable version of its Ripmo.

Since the release of its award-winning Mojo dual-suspension trail bike in 2006, Ibis has not offered customers any aluminium mountain bike frames.

Followers of the brand who desire their considered designs and expertly tuned Dave Weagle-engineered suspension, will now have option on a more attainable aluminium Ripmo. Released in 2017, the Ripmo was the first long-travel 29er from Ibis and has been met with universal acclaim.

All the features which make the carbon Ripmo so desirable are present on this new aluminium version. That means you get on-trend geometry, with a roomy 475mm of reach on a large frame and an even slacker 64.9-degree head angle.

Why has Ibis made the aluminium Ripmo’s head angle a full degree slacker then the carbon version? The assumption is that aluminium frame enduro riders are less risk averse than carbon bike owners. By that logic they could possibly be more prone attempting even wilder technical descents, in which case the slacker head angle will boost confidence and balance rider weight distribution while descending.

Other frame details include a 44mm offset for the 160mm front fork (supplied by DVO) and a rear linkage profile which plays very nicely with coil-shocks. Cable routing is fully internal and if you want to run big tyres on wide rims, Ibis has you covered. The aluminium Ripmo frame can accommodate 35mm internal 29er rims, rolling tyres up to 2.6-inches wide.

The only sacrifice is a touch more weight. A carbon Ripmo frame traces 2.76kg on the scale, compared to the aluminium version’s 3.72kg.