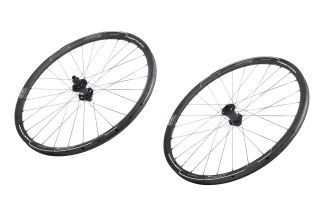 Using what the brand calls Dual-axis Nipple Alignment or the DNA rim profile, the holes in the rim are drilled to match the angles of force a spoke experiences as the wheel spins; push, pull, left and right. Each rim is moulded to accommodate the spoke lacing pattern, and the spoke holes are CNC-drilled into the reinforced areas of the rim bed, so they are perfectly aligned to accommodate the angle of each spoke.

HED says with the hole in line with spoke angle, there is no uneven strain on the nipple which also eliminates the spoke bend that's needed to accommodate this mismatch in a standard wheel. The brand also says it has been able to remove unnecessary material between the spoke holes (read: shave weight).

The net result should be a stronger rim with less weight and a reduced chance of spoke failure.

The new Raptor 29 rims have a 25mm internal/31mm external rim width and are designed for cross country and trail riding with up to 2.5in rubber sans tube. Produced in HED's Minnesota facility, the rims are claimed to weigh 380g, and come laced with 28 Sapim Laser spokes. Complete wheels are available HED's Brick House or Onyx hubs in 23 anodized colour options or Industry Nine's 690 point of engagement Hydra hubs in 11 colours.

Available now through the HED website, the Raptor 29er DNA start at $2195 for a complete wheelset with the Brick House hubs. International pricing and availability is to be announced.