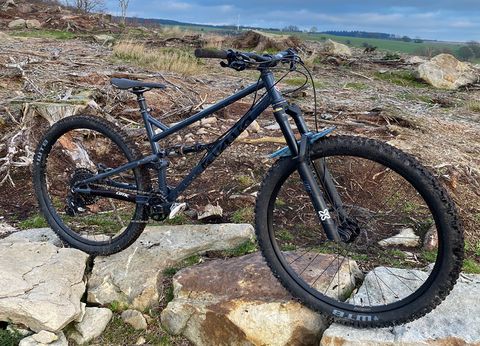 A charismatic trail bike with a do-it-all attitude

FlareMax was Cotic’s first suspension bike to get its radical 'longshot' geometry and now it’s been refreshed with lessons learned from its subsequent bikes. But do a more aggressive seat angle and longer reach paired with shorter travel suspension work out faster and more fun on the trail.

In terms of materials and basic structure, the new FlareMax follows Cotic’s well-established format. The front end uses top-quality, air-hardening Reynolds 853 steel complete with a custom kinked seat tube to mount the DropLink linkages and Cotic’s signature ‘Ovalform’ top tube. Both top tube and down tube get long reinforcing gussets at the head tube junctions and there’s a slim top tube to seat tube bracing pipe. A CNC machined alloy shock shoe bolts onto the centre of the down tube and all controls run externally along the down tube. That makes the slim tubes look crowded but bolted clips make servicing easy. Bottle cage bosses are provided under the top tube which looks weird in use but actually works fine.

The bottom bracket is threaded with ISCG tabs for a full-size chain guide but a small chain keeper is mounted to the chainstays as standard. The seatstays are also steel, tapering away from large transverse tube sections at the rear of the shock. The gear cable runs inside the seat stay but projecting bolts, top and bottom, still give a practical rather than prettified look. Alloy chainstays get a broad I-Beam front section then ovalise towards CNC machined dropouts. These carry a Syntace X-12 rear axle with cunning vertical anchor bolt for the replaceable hanger and axle terminal. Pivots on the seatstay mean it’s effectively a low, single-pivot suspension system in axle path terms.

Best mudguards and fenders for MTB

The nose of the shock has also been lifted slightly by a new shock mount, reducing spring-rate progression from a fairly steep 28 per cent to a smoother 21 per cent. This drops travel from 132mm to 125mm but it extends the damping adjust bandwidth to more riders and reduces peak load on the frame.

Unlike the Scottish mainframed RocketMax the frame is built in the Far East and comes in orange, red and grey options. According to Cotic a medium frame with rear shock and all the trimmings is 3.6kg/8lb which seems in keeping with the 15.6kg complete bike weight.

We tested the Gold Eagle build with Shimano XT two-pot brakes. Our bike had an X-Fusion Trace 36 HLR fork saving £150 over the standard Cane Creek Helm fork. It also had a tough rather than light carcass WTB Trail Boss rear tyre on Hope Fortus 26 wheels. An extensive options range means you can choose Hunt Trail Wide or Enduro Wide wheels for the same cost or upgrade to Hope and Burgtec component upgrades. As all bikes are built to order in Cotic’s Calver, Peak District workshop you can even substitute components you already have as long they’re compatible. These switch-around options also apply to the full XT Gold version, SLX based Silver Spec (£2749) or the X01 Eagle-based Platinum spec with Cane Creek eeWing titanium cranks and Hunt carbon wheels (£6349).

There’s a ton of rose-tinted hype around steel frames having a warm charisma that no other material can match. Actually delivering that in a time of more stringent safety regs and riders hitting stuff harder than ever is a very difficult job though. Thankfully Cy and the Cotic team have been doing it for over 15 years, developing and honing their own Reynolds 853 tubeset sizing, shaping and butting schedules along the way.

The result is a mainframe with exactly the subtly sprung, impact shrugging, traction-boosting compliance ferrous fans get evangelical about. Inevitably that means more twist through the frame if you really wrench the bars around on a tech power climb and some ripple and shimmy on the biggest drops. That OvalForm top tube means it never strays into random ricochet though and in most stressful situations its ability to ‘find’ the smoothest route and hold it like chewing gum on a hot pavement is a speed- and control-sustaining bonus.

The alloy chainstays deliver an impressively taut power kick so you can lever plenty of watts through the long 175mm cranks to get the extra steel mass moving.

A high-grip Vigilante front tyre and impeccably damped Trace36 fork flatter ‘go get it’ grip even further but it’s the forward shift in rider emphasis from the new geometry that really makes the new FlareMax a proper ripper. Add 780mm bar leverage and instant reaction from the 35mm stem and the more we loaded the front end and forced the bars lower in turns the more it loved it, casually connecting with the most treacherous tracks we hit.

The forward weighting also makes switchback or super-steep climb sections much less of a balancing act. You will need to compensate for less weight on the rear tyre when judging likely grip on flatter trails or slippery log ‘hups’. Inevitably, the long front end doesn’t pop and flick around as easily as a compact bike. Given the choice, we’d also go for one lighter, broader-rimmed Hunt Trail Wide wheel option to really glue things down through turns and perk up responsiveness out of them.

The flatter shock rate also means less kick at the end of the shock, so square edge slaps don’t force you dangerously forward or trip up that centralised balance at just the wrong moment. It places less stress on the shock during bottom out too, so it can cater for a wider range of rider weights without excess pressures and you can always add ramp with volume spacers if needed.

The Cane Creek shock also has a naturally rubbery top note over a consistently solidly damped core that matches really well to the overall frame vibe. The rebound and compression neutering ‘Climb’ switch is also handy for winching that 15.6kg mass up extended climbs. There’s a full range of low- and high-speed compression on both shock and suspension fork if you enjoy fettling and the rear shock gets low and high-speed rebound adjust if you really like to go in-depth with your damping. Thankfully it still rides okay with just a basic sag set-up but Cotic will gladly help with dialling settings on its extensive demo day schedule or if you pick the bike up at the Peak District.

It’s always interesting to ride a tweaked version of a bike you know well, but we were surprised just how much difference relatively subtle changes have made to the FlareMax. What was previously a very confident and assured but slightly genteel machine has got significantly sharper and more aggressive in a Daniel Craig, not Roger Moore ‘Bond’ style. It still keeps a distinctive steel charisma with its crazy levels of trail connection and forgiving, fatigue-reducing warmth on rougher trails all day long. The revised, shorter-travel shock layout actually feels more controlled more of the time but still keeps the FlareMax a very dynamic bike to ride, not a docile one.

Cotic makes no bones about being a left-field brand and inevitably something so long, slack and naturally compliant won’t suit everyone. There are plenty of similar frames that are a pound lighter, sharper in steer and kick and don’t have the bottle in a weird place either. Even the ‘alternative’ suspension choices might frighten some people back to the Fox and RockShox herd.

If you’re after something genuinely charismatic with ‘get stopped on the trail’ looks and a nice small brand story behind it then the new FlareMax should be on your wish list. The fact it consistently, definitively dropped our regular duelling partners on carbon or longer-travel bikes on most technical, treacherous descents while still feeling wonderfully warm and alive doesn’t hurt its appeal either.