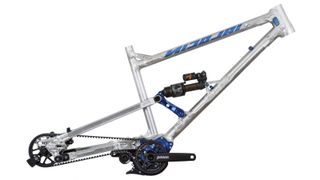 The way your mountain bike shifts gear is essentially the result of a duopoly between Shimano and SRAM.

Drivetrain design and product development are dominated almost entirely by these two brands and the result has been an adherence to the traditional rear-wheel cassette and derailleur.

A simple system, which has been incrementally perfected over decades, the current generation of 1x12 drivetrains are hugely impressive. With SRAM, there has even been an advancement to wireless shifting, with its AXS system.

The cyclo-cross vs gravel bike conundrum: understanding the differences

Despite the vast spread of ratios and slickness of shitting, there has always been a minority of industrial design advocates campaigning for gearboxes in mountain bikes.

The gearbox would solve a great many issues which trouble the conventional mountain bike drivetrain. By eliminating its rear derailleur, there would be an end to expensive (and annoying) rock-strike damage if you bounce off-line in a severe rock garden.

If you exchange a conventional drivetrain for a gearbox, on any dual-suspension mountain bike, the result is superior suspension performance, especially over technical terrain.

Gearboxes are good, but rare - why?

With the gearbox promising so much, why has it not been rushed to production? As with any mechanical design, there are issues.

Gearboxes are much heavier than a conventional drivetrain and they also have a greater mechanical drag. Mountain biking remains an activity where grams are everything and peak efficiency a non-negotiable feature.

Durability is another conflicted issue for gearbox mountain bikes. Although encasing the main mechanical components prevent environmental contamination, especially if a belt-drive system is used between the gearbox and single-rear-wheel cog, there is a lot more metal contact with a gearbox.

Why are brakes still steel and not carbon-fibre?


Christoph Lermen and a committed group of engineers from German firm Pinion have been building and supplying gearbox solutions to the mountain bike industry for years. Unfortunately, the demand from riders has been too small to force a broad frame design trend towards accepting gearboxes. Larger mountain bike companies have simply ignored the mountain bike gearbox.

With Shimano now finally having shown a commitment towards producing a revolutionary gearbox system, the days of the rear derailleur could be numbered.

This future of gearbox-driven mountain bikes could deliver dramatic suspension performance improvements, for all riders – from cross-country distance specialists to daring enduro racers.