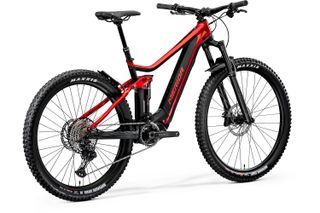 Both these new e-MTBs are aluminium and, although the eONE-FORTY and eONE-SIXTY names will be familiar to Merida followers, the numbers don’t quite correlate to convention.

With its e-MTB expansion Merida has optioned on reducing the overall suspension travel of its new limited-edition eONE-FORTY and eONE-SIXTY aluminium frames.

Best e-MTB: our pick of the best e-mountain bikes available this year

The traditional issue with long-travel rear suspension on any mountain bike is a possible loss of efficiency when not descending. Although e-MTB riders are much less concerned about that energy input loss when cranking along, due to the presence of battery pedalling assistance, there are other issues with long-suspension mountain bikes.

Merida identified that novice riders, new to mountain biking, might be more confident riding a frame which has a lower standover height. And one way to reduce frame standover on a full-suspension mountain bike, is reducing rear shock travel.

To this end Merida has configured the eONE-FORTY limited-edition e-MTBs with 140mm up front and 133mm rear. The frame is similar to that of the eONE-SIXTY (160mm front and 150mm rear), but a shorter shock stroke makes up for the difference in overall travel.

By reducing rear suspension travel these limited-edition Merida's become easier to ride, in terms of fundamental geometry, without sacrificing the overall terrain-taming ability expected from a dual-suspension mountain bike.

Familiar features from the other Merida e-MTBs are present on these new bikes, such as the integrated rear triangle fender.

Considering the very aggressive tread pattern tyres that most e-MTBs use at the rear, terrain debris projection onto the frame and seatpost can be a lot more pronounced. And if you are riding in muddy conditions, a knobbly rear tyre, rolling along with battery pedal-assistance, can project a lot of sediment.

Merida’s eONE-FORTY and eONE-SIXTY limited-edition bikes both have a generously sized rear fender, positioned at the appropriate angle, to ensure that you don’t cake your dropper seatpost or riding gear in mud.