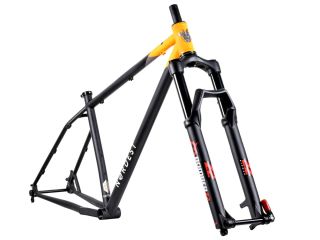 Steel frames have an ardent following due to their unique ride quality attributes and Nordest has now redesigned its Britango frame for both cross-country and trail-bike users.

The Portuguese frame brand uses 4130 chromoly construction to create a competitive price point for its Britangos.

Riders who wish to combine the trail-buzz-mitigating properties of steel for long-distance cross-country riding, now have the option of the Britango XC. It also features a 27.2mm seat tube, which optimises ride quality by creating greater compliance surrounding the seatpost.

Trail riding steel frame fans will find the Britango TR configured to their requirements. It has a slightly more robust frameset than the XC, which adds 300g of weight and a 31.6mm seatpost with internal cable routing.

Geometry differences between the two Britangos are minor, with the XC version registering a 67-degree head angle, running a 120mm fork, and 66.5-degrees with a 140mm up front. The TR’s head angle is half a degree slacker and both bikes have a 44mm headtube.

Reach numbers are generous for these new frames, with substantial differences between the three sizes. Nordest has shaped the new Britango range to have a 435mm of reach in a size medium, 460mm as a medium-large and 485mm as a large.

Tyre clearances are ample with the Britango XC capable of rolling a 2.4in 29er tyre at the rear while the TR can inch that up to 2.5in width. Both bikes also feature boost rear hub spacing.

If your metal bike desire extends to a Britango XC in titanium, Nordest can offer this more boutique construction, at €1400 for a frameset.