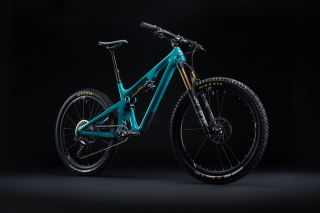 The past year has been a renaissance of sorts for Yeti Cycles. The Colorado-based company has subsequently overhauled its entire line-up with a new naming philosophy and streamlined its range which now comprises five models, including the new SB140.

Yeti now offers three 29-inch models, the SB100, SB130, and SB150, and two 27.5-inch options, the SB165 and SB140. The alpha-numeric coding nomenclature makes it easy to distinguish between each bike, SB denoting Super Bike followed by the amount of rear travel available ­­­— simple and effective.

As part of Yeti's 'Rip' category, the SB140 is a trail-focused bike designed around a 65-degree head tube angle, a 77-degree seat tube angle and a longer reach. In terms of personalisation, the SB140 is available in three colourways, turquoise, inferno and grey, as well as myriad build options.

Yeti offers three models of the SB140 in its highest-quality Turq carbon fibre specification. Each of which utilises the same suspension (Fox Factory Grip 2 36 fork and a Fox Factory DPX2 rear shock) and DT Swiss M1700 wheels but differ in terms of brake and drivetrain assembly. A SRAM AXS upgrade option is available on the T2 and T3 models.

There are also two models available in C Series trim, the C1 and C2, both of which utilise heavier framesets but retain the same slackened kinematics. Fox suspension bits are standard here (Fox Performance 36 fork and a Fox Performance DPX2 rear shock), but the C2 gets an upgraded wheelset, brakes and drivetrain.

For those who prefer a more tailored build, the SB140 can also be purchased as a frameset which comes in Turq guise complete with a Fox Factory DPX2 rear shock (US$3,499).