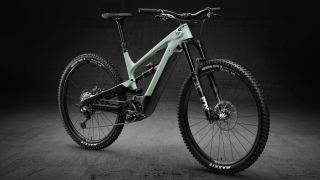 Most e-MTB models have opted for the 27.5+ rear wheel size, which delivers a huge amount of traction. Running the plus-size rear-wheel secures climbing traction on loose terrain, mitigating the additional power input of a battery-assistance system.

Not all mountain bikers love the inherent rebound-effect that a large-volume tyre can have. For those who prefer the more natural feedback and rolling performance of a traditional 29er wheel at the rear, e-MTB choices have been limited.

With its new Decoy 29 e-MTB, YT has evolved its battery-assisted mountain bike offering by moving from a mixed wheel size to a balanced 29er option at both axles.

The design logic supporting this change is that YT wishes to create an e-MTB which is comfier to climb on technical trails and roll big mileages on flat terrain. To achieve this both the head- and seat tube angles have been steepened.

On its 2020 Decoy 29ers, YT has reshaped geometry to a 66-degree head angle and 77-degree seat tube angle, which is 0.5- and 1-degree steeper than on the mixed wheel size Decoy.


Beyond the altered geometry and implementation of a 29er rear-wheel, most of the Decoy’s technical features are unchanged. That means you get a Shimano E8000 drive unit and a custom SMT 540Wh battery.

Typical of most YT products, these new Decoy 29ers are generously equipped. The Base model features a 150mm RockShox Yari RC fork and Deluxe select rear shock. On the Pro model, suspension components are upgraded to Fox’s Float Elite e-bike 36 fork and balanced by a Float DPX2 shock at the rear.