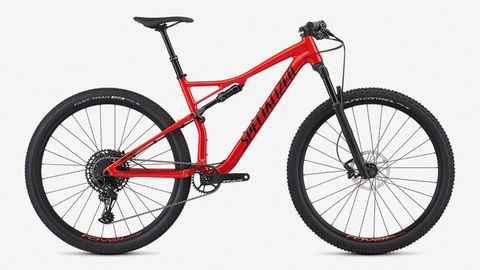 Low weight and unique bump-sensing shock tech means Specialized’s Epic FSR has been a racer's favourite for 15 years. The Comp Evo adds tougher, control-boosting trail equipment to the alloy Epic frame to make it fun as well as fast without breaking the bank. But are its limits set by the unique Brain 2.0 shock or trad rather than rad geometry?

The overall layout of the Epic frame is largely unchanged since its 2003 introduction but there’s a load of evolution and refinement built into the latest alloy version. It uses the unique D’Aluisio Smartweld tube set (named after designer Chris D’Aluisio) which features ‘coke can-style' closed end tubes to create strong junctions without the need for thicker, heavier walls that kill ride feel.

The Comp Evo is the only alloy framed Epic option left too, saving £800 over the cheapest carbon version.

All Epic’s have the same ‘Brain 2.0’ bump-sensing compression valve. This uses a chamber containing a brass weight with a five-stage adjustable ‘Brain Fade’ preload spring located on top of the compression-damping check valve. This is designed to screen out pedalling or cornering forces by only opening when a bump force knocking the rear wheel upwards overcomes the spring force and shunts the brass mass up and out of the way. Brain 2.0 has also been repositioned lower and behind the rear axle for more relevant, responsive triggering. The thick hose connecting the Brain 2.0 to the unique skinny, long-stroke rear shock plugs into a hollow linkage yoke for a super-neat plumbing solution. The whole Brain and hose set up weighs less than 100g more than a remote control bar lever and cable in a manually operated lock out arrangement. Rather than the usual chain-stay pivot, four-bar FSR design it uses longitudinal flex in the skinny seat stays to let the rear wheel track through its 100mm arc, saving the weight of two pivots, hardware and overlapping frame sections. The resulting sub-3 kilo frame weight is competitive with carbon chassis which cost more than the complete Comp Evo bike price, too.

It’s still an impressively pragmatic frame, too. There’s room for two bottle cages inside the mainframe - which is really rare on a suspension bike - with the down tube bottle getting both high and low options depending whether you’re running two standard bottles or one big one.

Specialized is also making a big fuss about the fact its bottom brackets are now threaded rather than press fit for better long term survival. Tyre space for a chunky 2.3in tyre is generous for a race based frame too.

While the angles were slackened slightly to update the Epic in 2018 the Evo’s 120mm fork knocks them back another degree to 68.5-degrees. The use of a short offset 43mm crown also increases stability and front end length. Reach is still short at 446mm on a large to reflect the use of an old school 90mm stem which is great for straight-line climbing but gives the steering a heavy, lurch prone feel.

While the stem is still long the 750mm bars literally add leverage to the idea this is more of a trail bike. The cost effective but impressively reliable X-Fusion Manic dropper post only has a 125mm stroke (100mm on smaller sizes). It has a zero offset clamp to push the saddle forwards to offset the fact the longer fork slackens the seat angle. While the rims are still lightweight, narrow 25mm section the front tyre is a reasonably grippy Ground Control tread and while the rear tyre is an almost slick

Fast Trak tread pattern has a reinforced Grid carcass to protect it from impacts. The front hub also gets oversized Torque Cap ends to match the fork and increase stiffness. The normally well controlled but relatively weak SRAM Level TL twin cylinder brakes have their power boosted with 180mm rotors. The result is bike that you feel significantly more confident pushing hard into tough trail sections on but which still comes in impressively light - especially for the cost - at 13.1kg.

That low weight as well as the fast-rolling rear tyre is immediately obvious in the easy acceleration and climbing speed of the Epic Evo. Leave it in one of the firmer settings (out of five) and you’re basically working with a hardtail until the back end gets a decent root or rock sized hit (3) or a proper wallop (4) sizeable drop or other seismic occurrence (5). That obviously adds an even more potent kick to proceedings, although the firmer the setting the more traction suffers over stutter bumps in corners or up rocky/rooty climbs. The obvious clunk as the Brain opens and closes can be off-putting too until you’re used to it, as it would signify something very loose or just plain broken in a conventional shock set up. The rear hub has a slow, gappy pick up that can highlight the clunkiness in the suspension, too.

The fact the baseline suspension action is naturally supple rather than loaded with pedal responsive anti squat also increases the contrast between on and off. You can run the shock pressures significantly higher than sag or the built in ‘AutoSag’ feature of the shock suggest to offset that, but that makes the rest of the travel hard to access. Once the spring force set by the Brain Fade dial is exceeded and the damping is kept open by successive bumps, the active pivot position sucks up hits surprisingly well for a skinny shock. It’s pretty responsive in setting 2, and 1 is basically fully open so while it has the potential to feel uniquely punchy it can be set to run as a totally conventional rear shock. This was certainly when it felt most ‘Evo’ and when we got most out of the more trail oriented spec and the easy, lightweight agility made it a lot of fun to flick around and dodge trouble. The short wheelbase also fits easily into tighter trail situations like switchbacks, climbing turns and other slow speed moments that can make more fashionable longer, slacker bikes feel clumsy.

However, as soon as speed starts to build and cornering loads increase you’re soon flying by the seat of your pants, and potentially likely to soil them in the process. That’s because the steep head angle, unresponsive 90mm stem, short reach and obvious flex through the skinny fork legs, front wheel and mainframe start to cause seriously nervous moments while the tyres and fork damping are still well within their limits. Because it’s a structural issue there’s not much you can do about it either except by sizing up to increase reach so you can fit a shorter stem.

There’s also palpable twist through the rear end if you start cranking the power through hard or trying to drive across off cambers or random rock fields. That compliance is a lot less stressful than the front end freaking out though and it can actually help traction by moulding to the trail rather than chattering across it.

We went into this test expecting the Brain 2.0 suspension to be the defining characteristic of the Epic Evo. It’s certainly a massive plus if you like the ‘automatic’ suspension action, but because you can switch it off if you don’t like it, and the Epic frame is still remarkably light then it’s certainly not a deal breaker. The kit Specialized has chosen is well judged to add more control for minimal weight, too, and while the GRID rear tyre is too wooden to roll as fast as it looks and the gappy rear hub is irritating, the overall package definitely makes the Evo a lot more versatile as a super-light fun hunter. The thing that stops it going after the really big game though is that even with a longer stroke, short offset fork the geometry is fundamentally out of date by trail standards. The flexy front end doesn’t put up much of a fight when the trail gets belligerent either.

If you’re happy with old-school geometry and want to mix hardtail punch with save-your-neck suspension at a remarkably low weight and an affordable price though, the Epic Comp Evo is literally in a class of its own.