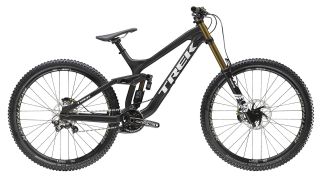 The most extreme form of mountain biking requires bikes of uniquely focussed design. While other off-road cycling disciplines prioritise weight saving and efficiency, downhill mountain bikes are only built to speedily descend the calibre of technical terrain that most people would struggling walking down.

In the realm of downhill racing and riding, suspension performance and terrain taming ability are the most important design parameters. Downhill bikes require minimal pedalling efficiency, because their speed is a factor of gradient and momentum. There is very little pedalling involved on any downhill-grade track. As such, suspension kinematics are unconstrained by issues like anti-squat curves and suspension lockout performance.

The consequences of any mechanical failure on a downhill bike also carry more severe consequences, due to the speeds and terrain involved. Engineering a robust frame, which accurately interprets rider input and deflects punishing terrain, are crucial for any downhill bike.

Downhill bikes also serve as final-product validation for any new mountain bike engineering feature or trend. If any new component or technology survives on a downhill bike, you are guaranteed that average trail or cross-country riders will never be at risk of failure.

BEST DOWNHILL MOUNTAIN BIKES: EVERYTHING YOU NEED TO KNOW

Since the advent of downhill-specific racing frames in the late 1990s, maximising suspension travel and kinematic function has always been the object of all designers. It is telling that the bikes on our 2020 list all have rear-suspension travel values of between 190- and 215mm.

When 26-inch downhill frames were all that was available, bikes were much shorter axle-to-axle, but had huge reserves of travel. It was not unusual for a downhill bike from the mid-2000s to have 250mm of rear-suspension stoke. That is simply not the case anymore.

In downhill racing, suspension numbers are not always what they seem. Too much rear-suspension travel can play havoc with shock rebound characteristics. Ensuring that downhill bikes became more predictable in their suspension behaviour over brutally technical terrain, designers started trimming rear travel as larger diameter wheels came into fashion – which could mitigate terrain impacts.

The advancement in air-shock technology also helped convince many that superior internals and shim designs were indeed a replacement for having the most outright millimetres of travel.

Geometry was long ignored as downhill bike designers attempted to package bikes which could cope with the longest possible travel forks and rear shocks. But this has all altered in the last few years.

Downhill bikes require greater stability than any other mountain bike design, due to the gradients and terrain they race on. A longer wheelbase, or even just a longer front triangle, places the rides in a more centred position on any bike. And with the extreme gradients that a downhill descends, rider position is even more crucial.

Multiple downhill racing world champion, and generally considered to be the sport’s greatest rider, Greg Minnaar, has been the source of a revolution in downhill bike geometry and design. Minnaar is an unusually tall downhill rider, at 1.9m. He has always felt too cramped on most downhill bikes and started advocating for the benefits of a longer frame.

The result has been an acceptance that for most downhill riders, especially larger individuals, a longer frame is more enabling. Minnaar’s other significant contribution was proving the value of 29er wheels on downhill bikes. Despite the obvious terrain rolling benefits of larger wheels, downhill bike designers remained stoically committed to 26-inch wheels.

After the move to 27.5-inch wheels, nobody believed that a 29er downhill bike would work. They were projected to be too ungainly. And the issue of designing a frame that would allow extreme suspension travel (front and rear) with adequate clearance of 29-inch wheels, was deemed an unnecessary engineering challenge.

Minnaar convinced Santa Cruz that 29er downhill bikes would work and after debuting one in 2017, his theory has been validated. Once unimaginable, most of the better downhill bikes on offer in 2020 roll the 29er wheel size, which does offer unrivalled traction and stability when storming through severe rock gardens.

Many of the current 29er downhill frames are also available in the smaller wheel size. Those downhill traditionalists who prefer the easier handling (and correction) of a smaller wheeled 27.5- inch bike in the air, will appreciate this option.

One of the winningest downhill bikes ever – is updated

Check Amazon
Proven pedigree and a vanguard of the revived geometry downhill movement
Lots of rear-suspension travel and 29er wheels make it nearly fool proof to ride
Riding a downhill bike this on trend, does not come cheap
No aluminium option

Many of the established trends in current downhill mountain bikes, have been the result of Santa Cruz. The Californian brand isn’t afraid of trying new technologies and over its lifecycle (since 2002), the V10 downhill bike has been a trailblazer for evolution.

It was the carbon-fibre bike to win a World Cup downhill race. It also became the first 29er downhill bike to win. Having to accommodate multiple world champion, Greg Minnaar, has meant that Santa Cruz engineers were always researching the possibility of creating longer frames, with more space for rolling bigger wheels.

The V10 combines a sophisticated suspension linkage, with 215mm of travel and rolls 29er wheels. It is simply a downhill rocket sled of a mountain bike.

Proving that metal can still win

Check Amazon
A very convincing interpretation of the high-pivot theory
Aluminium frame reduces crash damage anxiety
Being aluminium, it is obviously not the lightest downhill bike around

Commencal remains committed to using aluminium as a frame material but isn’t afraid to experiment with trick chain routing or big wheels.

With the Supreme it shows that not only Santa Cruz can build a capable 29er downhill bike. Although the Supreme’s rear suspension system is relatively uncomplicated, it does have the benefit of a high-idler chain routing. This guides the chain along the rear triangle’s seat stay, which lessens the negative affect that chain growth can have on a long-travel dual-suspension bike.

That chain idler might look odd to some, but it has proven a very capable design implication for Commencal and scored the Supreme 29er a series of World Cup race wins.

All the latest downhill features are present on this Pivot

Classy all-carbon design
Ample rear hub spacing allows for overbuilt 29er downhill wheels
If you are obsessive about rear-suspension travel statistics, then 190mm might be too little for your OCD

The Phoenix features a leverage curve that is particularly suited to the very latest generation for high-volume air shocks. It might have a touch less travel than its rivals, but it does feature the Superboost 157mm rear axle spacing. This most generous rear hub spacing will allow you the width to build an immensely strong 29er wheel.

For those who are drawn to riding the steepest of technical tracks, Pivot’s big-wheel downhill bike has a 62.5-degree head angle, which means you’ll remain confident, even when it feels like you are trying to go down features which are too intimidating.
View Deal

One of the most recognisable frames embraces 29er wheels

Trek’s Session is legendary downhill bike, which has remained relatively recognisable over the years. With a rocker-arm actuated suspension design, Trek Session silhouette is iconic.

An update to larger 29-inch wheels has seen the Session shorted is travel from to 190mm. To protect the frame from rock and trail debris strikes, there is adequate downtube protection, in the form of a special moulding over the carbon fibre.

The Session 29 might not be the longest of downhill bikes, but it certainly is slack. With a 62.1-degree head angle you’ll launch off even the most vertigo inducing drops with confidence.View Deal

Absolutely unbeatable components and frame design at the price
Only available in 27.5 for now

The German direct-sales brand offers tremendous value. With its Sender you have a choice of aluminium or carbon frames, and no matter which you choose: they are incredibly priced for what they offer.

Canyon remains committed to the 27.5-inch wheel size on its downhill bikes (for now) and the German company has resisted the temptation to chase extreme geometry trends. Although the Sender does register a very slack 63-degree head angle, it is not an overly long bike – like some of its rivals.

The Sender’s rear suspension linkage offers 203mm of travel and has been optimised to run with the latest high-volume air-shocks.

With its compact size and agile geometry, the Sender would be best for riders who enjoy manoeuvring the bike with substantial rider input, instead of merely being a passenger downhill, relying on the frame’s inherent stability.View Deal