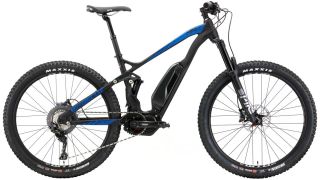 Motobecane spent its budget on quality parts instead of an integrated frame design (Image credit: Motobecane )

Motobecane has significantly reduced the barrier of entry for those mountain bikers who wish to embrace pedal assistance.

The American value brand has configured a new e-MTB trail bike with familiar components and an unbeatable price point.

Although the frame does not feature a slickly packaged battery-pack and e-motor design, like many mainstream second-generation e-MTBs, there is no arguing against the Motobecane HAL eBoost Pro’s value.

Stopping the HAL eBoost Pro are Shimano XT brakes and true to its trail riding configuration, there is a dropper seatpost fitted as standard.

Motobecane is quoting 21.7kg as a mass number for its HAL eBoost Pro, when weighed without pedals, which is competitive when measured against similarly configured e-MTBs.

The launch price of $3499 is an astoundingly low, considering this bike’s available components, which don’t include even a trace of entry-level specification.

Motobecane has commented that the HAL eBoost Pro’s incredible price will be adjusted upwards, as global sales volumes increase.