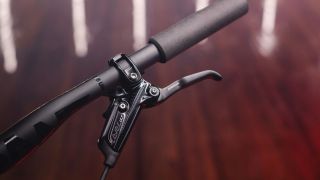 When it comes to mountain bike brakes, everyone has their preferred brand. Some love the consistent bite point and power of Shimano brakes, while others lean towards the superior modulation and control offered by SRAM. You can't ignore the smooth, progressive power provided by Hope and others — the list goes on and on.

SRAM didn't start off making brakes. Back in 2004, the company acquired Avid, a brand that at the time, had a decade of experience producing brakes in the bike industry. Over the years SRAM has evolved and improved its hydraulic systems with riders such as Downhiller Troy Brosnan and XC crusher Kate Courtney each having ridden SRAM brakes to victory at the highest levels of their disciplines.

Brakes with SRAM’s Bleeding Edge see the bleed port moved to the bottom of the brake caliper, allowing gravity to fill each piston bore with brake fluid for automatic air purging of the whole system — something which provides a smoother and more consistent bleed.

SRAM’s contact point adjustment allows you to adjust the modulation without having to fiddle with the brake pads themselves. Brakes with Contact Point Adjustment will be denoted with a ‘C’ in the name.

Reach adjustment is key to placing the lever in just the right spot. Sram’s Code, Guide and G2 brakes see tool-free reach adjust, while the Level brakes have hidden tooled reach adjustment — each denoted by an ‘R’ or a ‘T’ in the name respectively.

SRAM’s high-end brakes feature a sealed bearing at the lever pivot for a smooth and light lever action while the other models in the range rotate on a bushing.

With brakes, shifters, lockout lever and dropper post levers, cockpits are becoming increasingly crowded. All brakes have a clamp, so why not take advantage of it to secure everything else to your handlebars? Matchmaker allows you to utilise your brake clamp for shifters, dropper post levers, and suspension lockouts — less hardware means fewer grams.

Do you run your brakes standard or moto style? SRAM’s Piggyback reservoir means the lever can be attached to the bar on either side, so instead of having to swap the hoses, you can just switch the levers around.

Found on the high-end gravity-focused brakes, the SwingLink sits behind the lever to push the plunger that moves brake fluid to actuate the brake pads. Essentially, the cam allows the pads to move quickly up to the point they make contact with the rotor and then reduces the mechanical advantage from the lever to provide more control.

While this system isn’t all that unique, the triangular cam combined with upsized pistons eliminates the dead space in the lever throw providing even modulation and eradicating unwanted wheel lockups. Models that don’t have the SwingLink cam will feature a DirectLink design.

Brakes that have the SwingLink will have with an ‘S’ in the name.

The timing port in a hydraulic brake is found between the connection in reservoir and master cylinder bore; when the lever is squeezed, the port is closed, pressuring the system. SRAM says its timing port closure system features durable seals and an ultra-smooth cylinder bore finish for consistent braking power.

Air bubbles in hydraulic brakes can destroy feel and braking consistency because gasses can be compressed considerably more than liquids. SRAM says the shape of its internal fluid bladder is designed to force air out of the lever, so it's always filled to the brim with fluid. This system allows a degree of self bleeding, resulting in improved back pressure relief for more dependable braking.

Brakes with the Ultimate moniker feature a carbon lever for added stiffness and reduced weight while still retaining all the attributes of its higher-end stablemates.

All of SRAM's hydraulic brakes utilise DOT 5.1 fluid instead of mineral oil. DOT fluid and mineral oil have the same boiling temp (208°C) but SRAM says DOT fluid is less compressible than mineral oil and deals better with contaminants such as water.

SRAM brakes you can buy today

The Level brakes are designed for cross-country riders looking for the lightest SRAM brakes around — the top of the range Level Ultimate has a claimed weight of 318g. The levers themselves are based on the trail-oriented Guide, mirroring the internals with the same Timing Port and Expandable Bladder, but the tool-free reach adjust has been ditched for a system requiring a hex wrench — you know, because knobs add grams. The flagship models also feature titanium hardware.

The Level calipers grab the rotors with two pistons; again, pistons have mass so the fewer, the better in the mind of weight-conscious riders. To ensure peak performance and heat management, they still see the stainless steel heat shield borrowed from the Guide brakes. At the top of the product pyramid, the Ultimate and TLM versions feature a one-piece caliper, the rest of the range are two-piece designs. Any Level brake with an ‘L’ in the name also features a lightweight lever and caliper design.

Brakes that find a middle ground between weight, power and adjustability

Starting at the calipers, SRAM says the pad pocket is narrower on the G2, making for a stiffer caliper body. The area around the bolt which connects the two halves of the caliper has been beefed up to supply a seven per cent increase in power.

There's also a new hybrid metallic/organic pad material, and only the Ultimate model gets a sealed bearing lever pivot; the RSC spec rotates around a bushing.

Trail brakes that can be had for a bargain

$85.72
View at Amazon
$135
View at Jenson USA
$135
View at Tree Fort Bikes
See all prices (6 found)
One of the best trail brakes you can buy
Lower end models suffer from the lack of SwingLink and can leave you longing for power

The Guide brakes replaced the Avid Elixir and were the first models to feature innovations such as the SwingLink, Timing Port Closure and air bladder. Although they have been superseded, the Guide brakes are still readily available and are likely to be found on sale.

When SRAM launched the Guide brakes, the brand ditched the Taperbore master cylinder, marking a significant improvement from both a consumer and mechanics perspective; the new (at the time) sliding cup seal Timing Port Closure allowed the lever to effectively cope with air in the system effectively.

The best brakes you can buy for gravity bikes

The Code brakes are designed for those situations where power and modulation keep you on the ragged edge but don’t quite let you fall over the side in dusty carnage. Designed for gravity riding and reigning in portly electric mountain bikes, the Code brakes feature a four-piston caliper with each side featuring a 15mm and 16mm piston — SRAM says this increases stopping power by 15 per cent over the previous model.

At the lever, SRAM has increased the size of the fluid reservoir by 30 per cent to combat brake fade as the system heats up.